Unintentional electronic delays spread all over this technology, yet there is not a single text or class notes explaining its sources and its effects on signal transmission in an organized format. We believe that presentation in a modular form continuously and in a sequential manner helps the students to understand the topic easily without too much confusion. It is this philosophy promoting the authors to reserve a section for this subject in this series of Class Notes. Please note that intentional delay devices such as SCR or triac in which the waveforms delayed and changed intentionally to control the speed or to obtain low DC voltages are not covered in this series.

The speed of electronic processing has now reached its stagnation point at GHz corresponding to nana second. This is not to infer that it has reached its limit. On the contrary, with advanced technology it is predicted that it will move in the upper direction. To improve the processing speed it is important to understand the mechanisms of delays. Once the sources are identified, then the remedies can be determined. It is the intention of this part of Class Notes to indentify the sources of electronic delays, and then suggest a solution. Identifications will follow in a citation method rather than proving the equations. In this respect perhaps this series can be used as a mobile hand book.

There are, in general, five types of electronic delays:

This effect has been with us as early as the deification of electron. Consider a long electrode in vacuum connected to a source, assumed DC for simplicity, as shown in Fig. 1.

Electron having negative charge will be travelling to the positive terminal with the delay time given by;

A word of caution about the velocity of electron. Electron, in general, has three velocities shown artistically in Fig. 2.

1.1. Thermal Velocity due to Temperature: Electrons are in random motion; their velocities are given by [1];

1.2. Drift Velocity Due to an Applied Field: Electrons align with applied field, their velocities are given by:

µ depends on the type of the charge carrier. In n-type germanium semiconductor its value is 3900 cm/v-sec. With 10V/met. applied field, in germanium;

This value is much smaller than the thermal velocity.

1.3. Electron Wave Velocity: Electrons’ energies transferred at the speed of light, given by:

In vacuum, its value is:

Values of these velocities are shown in TABLE 1 for easy reference.

These are acceptable numbers, but it is for an ideal situating, the vacuum.

There are several methods to reduce the transient time delay. One simple method, as is evident from the above equations is to shorten the path length, L. This method is applied to the base of H.F. transistors as it will be shown in the next section. A second method, as is evident from equation (5) and (6) is to use material with smaller permittivity, . This will increase wave velocity, vw , thus reducing transient time.

Depending on the modes of operations, analog or digital, transistor has two distinguish time delays which limits its high frequency response in analog operation, and switching speed in digital operation.

2.1. Analog Operation: In this mode Vbe is forward biased and Vbc is reversed biased. Transistor acts as an amplifier. Upon the application of signal (assumed small amplitude) quastatic point, Q, will swing between points A-B without entering ON or OFF regions as shown in the Fig. (3).

Transistor is restricted to swing between points A-B.

Note: H.F transistor geometry is different than shown in Fig. (a) [2].

There are two types of delays in this mode; transient time effect and capacitor charging times.

The second transient time effect, ignoring emitter junction d1, is the collector depletion region d2 shown in Fig. 3 (a). This delay is given by [3];

vs is electron saturation velocity. Collector depletion region, d2 is given by [4];

It is seen from this equation that higher impurity concentration will definitely reduce the collector depletion region width, d2, and thus reducing the collector transient time delay. Total transient time effect will be the sum of above delays since the process is accumulative, thus

2.1.2. Capacitors charging times: There are two depletion layer capacitors, Cbe and Cbc. These are given simply by their time constant as:

These delays can be reduced by reducing emitter and collector intrinsic resistors, re and rc. In addition capacitors Ceb and Cbc can be decreased by noting that junction capacitor is given by well known formula;

A area of depletion region

It is now clear that higher doping will also reduce the junction capacitors. The total capacitor charging time will now be;

The total transistor delay times will now be the sum of transient delays times plus the capacitor delays times as;

Above delay times are summarized in table 2 [3].

The responses are almost the same except for td in bipolar input. In addition bipolar input pushes transistor to turn off with sharper fall time, tf, thus steeper slope. But it requires bipolar power supply. We will consider only the uni-polar input. Fig 4 (a) shows four distinguished parts:

(1) Rise time, tr, due to all transients and capacitor charging times discussed in analog operation.

(2) Storage time, tso. Once the transistor enters On region, it becomes saturated and its collector current remains almost constant at Vc/Rc since during this time Vce ≈ 0, (0.1 – 0.3) depending on the type of the transistor, Ge or Si.

(3) Saturated time, tsa, required for the minority carrier to return to base.

(4) Fall time, tf. After removing the input Ic decrease to zero with a different time constant. Fall time is longer than the rise time, tr, due to returning the accumulated charges in the collector region.

In addition to above, collector saturation time, ts is given by [2];

Total transistor switching time will be the sum of all above delays time is:

To decrease the switching time, we must increase cutoff frequencies by decreasing the storage capacitors especially the collector junction capacitor. A second method is to use Emitter Coupled Logic (ECL) shown in Fig. 5, [6]. This configuration is used both in analog and digital integrated circuits. In analog it cancels fluctuations in the power supply by providing high Common Mode Rejection Ratio (CMRR), and in digital it provide fast switching without either transistor entering On or Off region, operating in the active mode with shorter swinging amplitude. 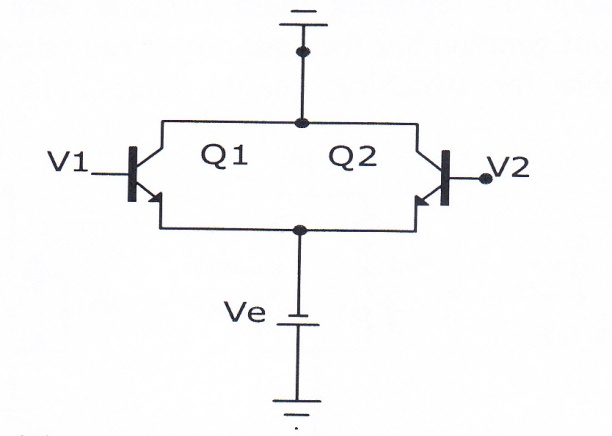 This term refers to input- output relation as a whole in digital integrated circuits rather than the delay in individual component. Digital integrated circuits are made of several directly interconnected transistors in different configurations such as TTL, ECL, and CMOS – transmission delay between input and the output is referred to as propagation delay [7]. Overall delay is the sum of individual transistors delays as discussed in the previous sections. Thus, there is no need for developing new theories to evaluate propagation delay constant. However, this type of delay has a significant effect on data transmission. Fig. 6 shows a typical effect of this delay on the output of an And Gate. Note especially, if the delay is one pulse width as in (b), (note impossibility), the output, (A1. B1─ ) becomes zero! In such case, since the propagation delay time is specified in manufacturer specification, the only choice to improve the situation is to change the input pulse width to at least ten times larger than the delay time. Unfortunately this will also constrain the speed of data transmission, see problem 8. 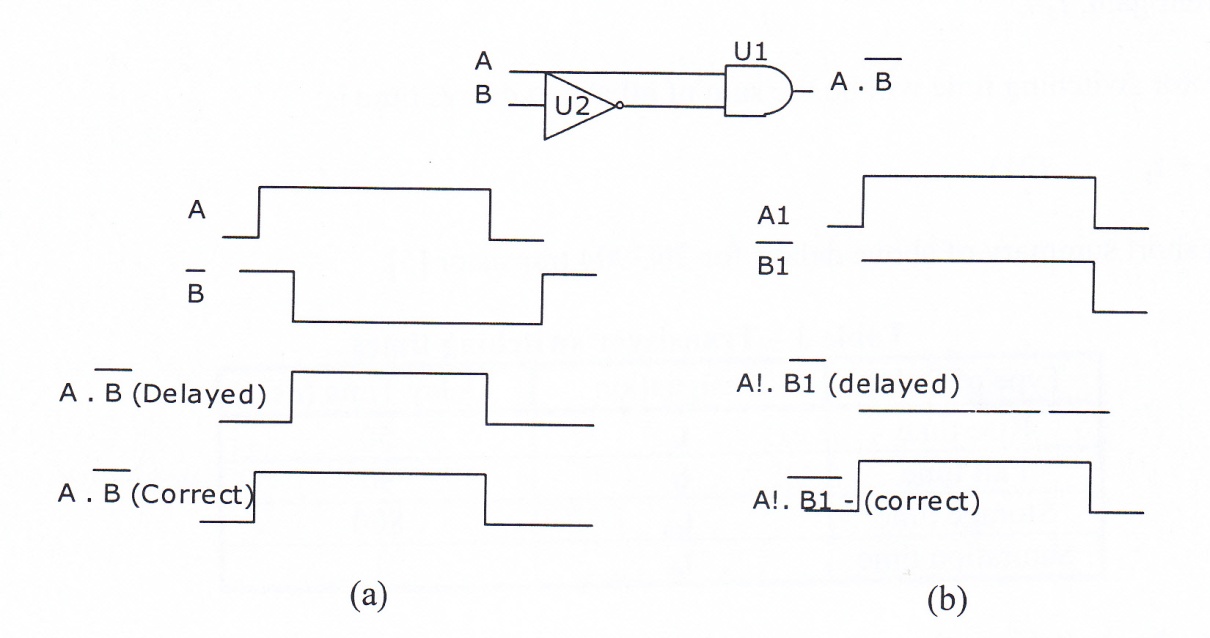 We conclude this section with the most popular digital integrated circuit configurations shown in Fig. 7 with their approximate delay times given in table 4, [8]. ECL configuration seems to be the fastest switch except for the losses associated with Rc and Re. This circuit can be converted to a losses Bi-CMOS technology configuration by replacing these resistors with active elements, such as MOSFETs [9]. Finally, CMOS configuration has the least power consumption as is used in the ROM, except the model is not suitable for switching due to large built in capacitor in the gate.

This term is usually referred to the slope of output voltage with respect to time as applied to intrinsic operational amplifier shown in Fig. 8.

Fig. 8 – Ideal response of an Op/Amp to a step function

Delay shown is for ideal response. The actual response will depend on the loading of Op/Amp and it would look exponential charging capacitor in an RC circuit. In approximate form it is similar to rise time considered in the previous sections. It is due to transient and capacitor charging time effects. Since it is the intrinsic properties of the device, it can only be improved by careful device fabrication. Its typical values for different Op/Amp is cited in Table 5 for a reference [10]

This term refers to delay between input and output state in comparator circuits. Fig 9 is a schematic of a two level comparator used extensively in control processing. For this circuit the input applied at terminal 3, non-inverting terminal, is shown to be a sine wave of enough amplitude to cause the state of the output to change. Simulated input-output is shown in Fig. 10. The output is almost a square wave with a delay, i.e. when the input becomes zero; the output still maintains a small positive value as is evident from the blue line. This is called hysteresis effect, somewhat similar to ferromagnetism. In general output does not change state immediately from high to low. This delay has a significant effect in industrial control processing. With a careful design this delay can be controlled as explained below. 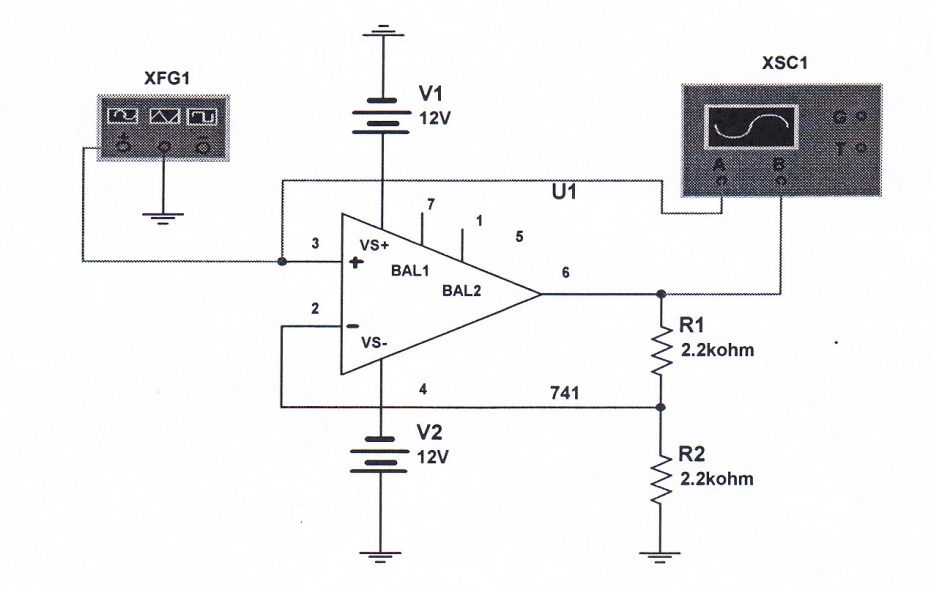 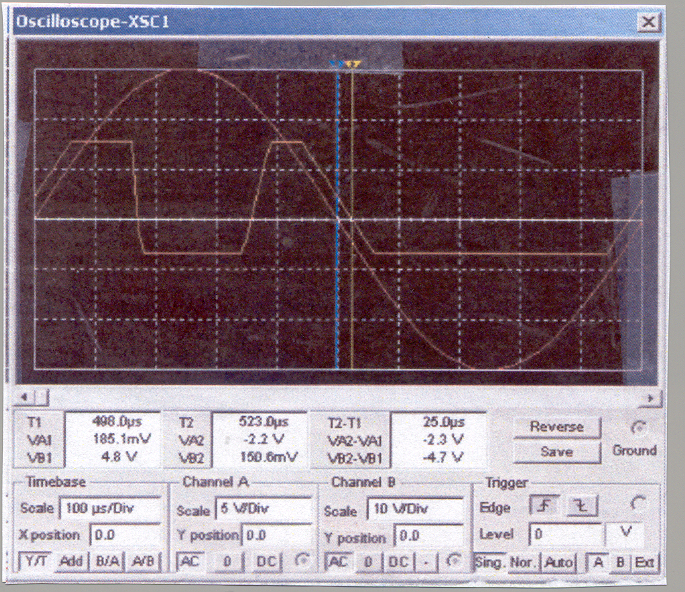 Normalized hysteresis time, th is given by [11]

Using above figure with x-axis sensitivity of 100 µs/Div, the delay between input-output (blue- red vertical lines) is about 4µs. It is clear from the above equation that selection R1 and R2 play an important rule to reduce the hysteresis time, th. But unfortunately their selections also affect the noise margin. This is the parameter which enables comparator not to switch back and forth under small fluctuations, higher its value, the better the performance of comparator. Its normalized value is given by [11];

V+ is the high level output square wave voltages. This equation indicates that noise margin, n is in conflict with hysteresis time, decreasing th will also decrease n, causing comparator to mall function, unwanted switching back and forth. A plot of n and th are shown in figure 11. Since n is an increasing function but th is a decreasing function of R2, the intersection of these two curves establishes the proper choice for R1 and R2. Since there are four possible choices, consideration of power consumption can help to select the best values for R1, and R2. 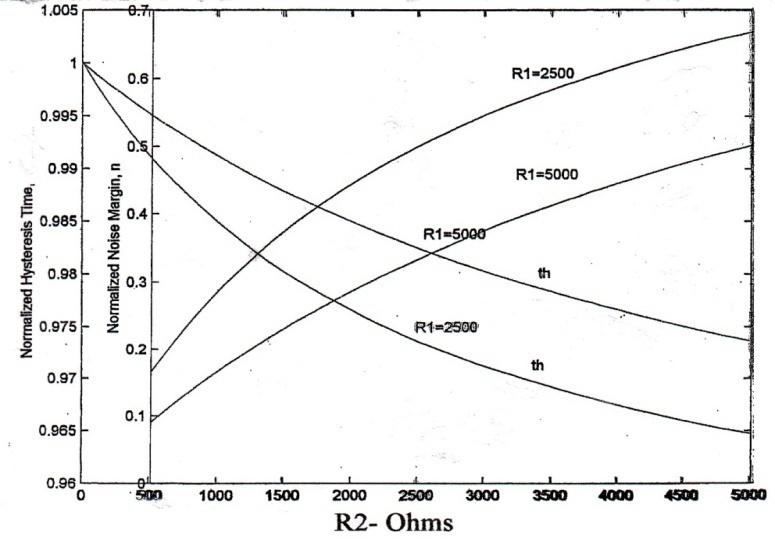 This finishes our trial for Series 2. Our next series will be an exciting topic about Colors Secrets which has never been published before. Hope it will be ready by the time you finish this series.

Thank you for your interests

1. A piece of conductor is connected to a voltmeter as shown. Electrons are moving at random directions as shown with the thermal velocity given by equation (2), what will be the voltmeter reading? Why? 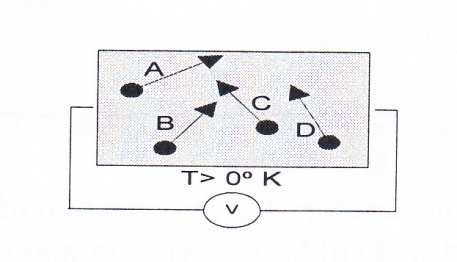 2. A piece of n-type GaAs which has a mobility µn = 8500 (cm2/V-sec) is connected to a 12 V DC voltage source as shown. Neglecting thermal velocity, determine electron drift velocity. Device can be used as an oscillator, called Gunn diode mistakenly.

3. A pulse voltage is applied to a RG/59 transmission line which is 500 meter long and has a dielectric constant, . How long will it take for the pulse to reach the end?

4. In transistor analog operation, which parameter or the element limits the transistor H.F. response?

5. For the typical values given in table 2, determine H.F. limit of that transistor.

6. Determine the shortest input pulse width for the transistor given in table 3.

7. Refer to Fig. 6 and table 4. Using ECL configuration with 2 ns delay time, what must be data transmission rate for the input pulses?

11. Noise margin is the difference between two reference voltages. For Fig. 9 they are given by:

12. Using Fig. 11, determine the four possible values of, R1 R2, pair for optimum response. Which pair would be the best possible choice?